What once was, and what has yet to be……

The Lyric Opera House was built in 1912 and has a long history of community gatherings, presentations by local and touring companies, vaudeville acts and movies. The building was designed by Ellerbe, Round and Sullivan and housed the local YMCA, a radio station, the VFW, and a 580 seat theater. The theater held traveling Vaudeville acts until 1932 and featured performers including Mae West, W.C. Fields, and Boris Karloff!  In 1935 it was renamed The State movie theater when it was purchased by Paramount Studios and was active until 1955.  The space was then used for several retail outlets such as jewelry stores, a music shop, a TV shop, Brownie Furniture, ice cream parlors, a pizza shop, a photography studio, hardware store and until the 1980’s Virginia Floral. 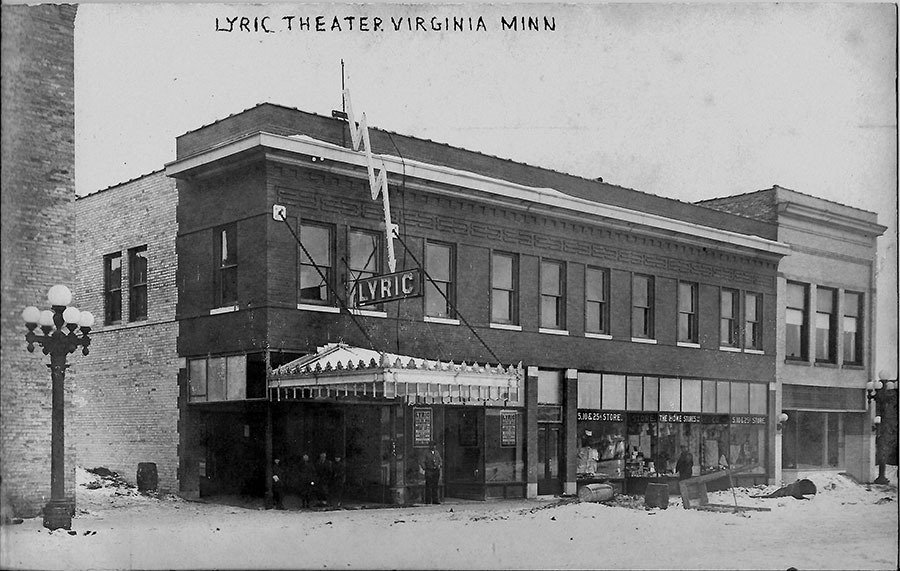 Early storefront photo. Work was completed in 2017 to restore the storefront configuration including seven doorways in their original locations!  The marquee and flag will be added when the main theater has been completed.

As the story has been told, the daughter of one of the original owners, Mrs. Fleher, listed the building for sale in the early 60’s but did not have any luck finding a potential buyer.  She removed the original theater seats, took down the marquee in 1961, and sold off whatever theater equipment she could.  A few years later she was finally able to sell the theater to a gentleman with a vision of having a movie theater back on the main street. However, after struggling to maintain such a large building, the gentleman put it for sale in the 1990’s. Two downtown drinking establishment owners offered to purchase the building with the intention of tearing it down and replacing it with a parking lot.

Seeing the potential of the historic theater, the Laurentian Arts and Culture Alliance (LACA) was formed, incorporated as a 501(c)3 non-profit corporation in 1998 and then purchased the building to save it from demolition. The building was renamed the, “Lyric Center for the Arts.”  With the structure secured, LACA began to remodel small portions of the building creating an art gallery and small performance stage, called, The First Stage, which was opened in 2006.  Since then the organization, and its patronage, have grown substantially. The renovated space has become known as The First Stage Art Gallery where new artworks are exhibited each month and artists gather weekly.  Until the lobby and 120 seat performance space is renovated the Lyric’s adult and children’s theatrical groups, the IRRRP & Small Part Players, perform in the Lyric Annex a performance space in a City-owned building adjacent to the Lyric Center for the Arts. 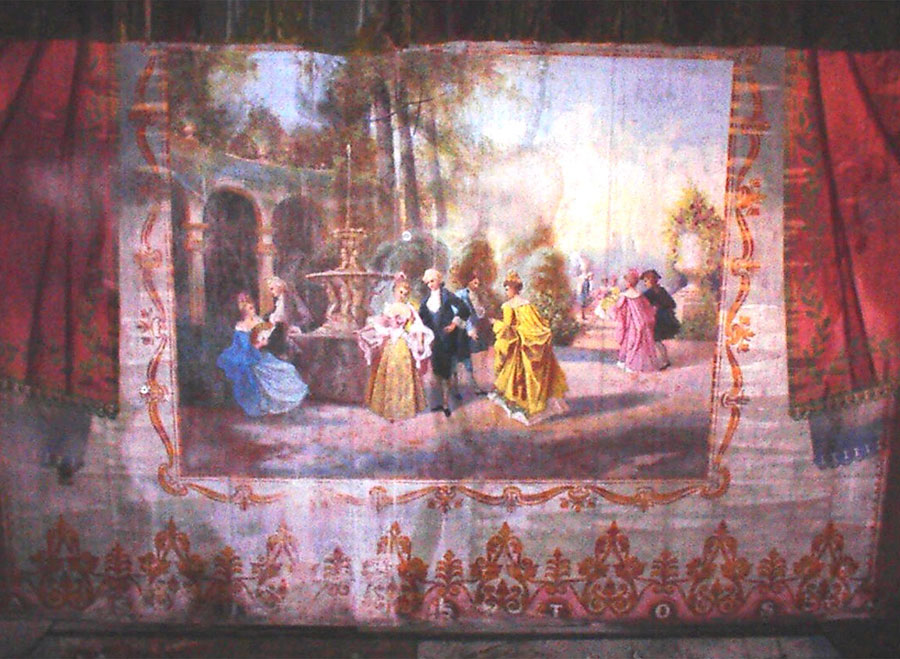 The original fire curtain still hangs in the historic Lyric Theater and is a work of art from Twin Cities Scenic Studios. 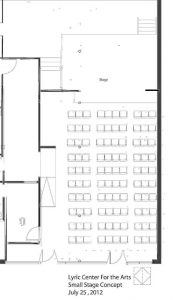 The vision for the Lyric Center is to renovate the entire building with the historic 1912 ambiance. Thanks to donations from people like you we have completed the concept design and budget for total renovation.  With your contributions and grants the historic storefront reconstructing was completed in 2017.  We can now meet ADA and building codes for future renovations. Plans are underway for the development of a lobby and to creating a 120 seat performance space for the Lyric’s children’s theater, musicians and other live events.
The Lyric Center will provide a home for numerous area artists and arts organizations as well as provide a 500 seat accessible venue for local and touring music and theatrical productions.  Added benefits will be the Ballroom & Lounge that will provide a unique venue for wedding receptions, small conferences and other events taking place in the community.  The organization will draw tourists and professionals into our area and result in a significant economic boost.

Click here to view the architects report on exterior rehabilitation needs including in-depth history of the Lyric’s place in the commercial district of Virginia MN!

Concept drawings from HGA show how the Lyric will be used. 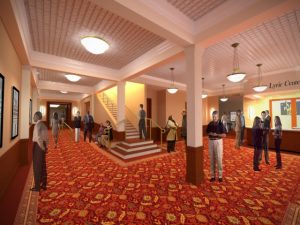 The view from the back of the house! 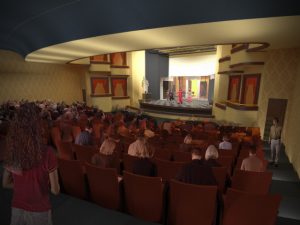 The future view from the balcony. 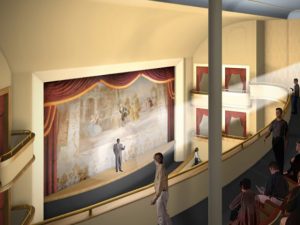 The view from a box seat. 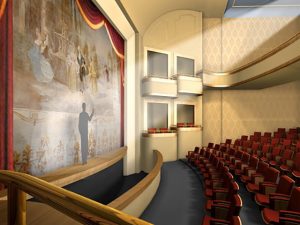 The future ballroom at the Lyric! 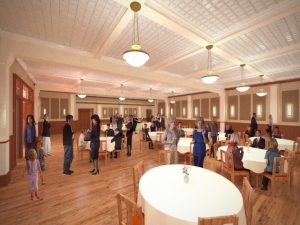 The lounge area at the Lyric! 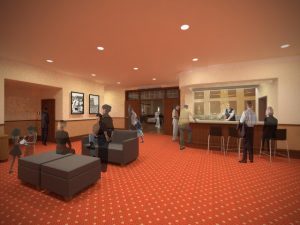 All renovations are made possible through grant funding and donations made by people like you!

Preserving and restoring this incredible building while raising funds and making room for performances, exhibits and creative spaces for all has been a challenging undertaking . . . and requires a lot of planning!

Based on years of community input and planning we have learned it is important to grow a sustainable income base with continual redevelopment for the audience through live performances.  Keeping this in mind, The Lyric Center for the Arts has committed to the following Delevopment Phases:

Economic Impact:  As of 2018 the Lyric has brought in more than $550,000.00 in grant funding into local economy. It is exciting to realize the local economic impact of a vibrant art center. Recent studies indicate when the Lyric Center for the Arts is completed will add $2.8 million annually.

Moving ever forward we are now entering into Phase 4; the development of the Lobby and a 120 seat performance space for Lyric’s growing and popular Small Parts Players children’s theatre!  In addition to this new home for the Lyric’s  Small Parts Players, this space will be used for musicians and live performances and can be rented for other events as well!  Please join us, make a donation today, as we move on to the exciting new Phase 4!